You are here: Home1 / Choosing the right tattoo removal laser for your clinic2 / The truth about picosecond lasers 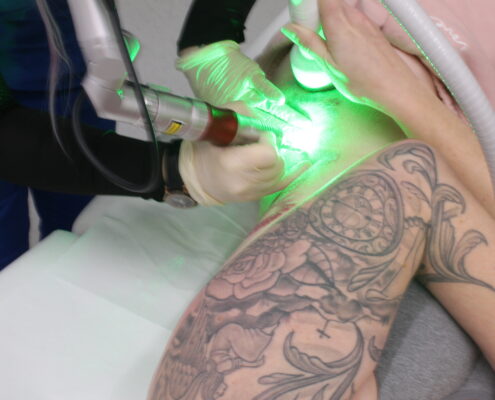 The introduction of picosecond lasers is a major advance in the treatment of colour tattoos, pigmented lesions and skin rejuvenation.

Regrettably in what is largely an unregulated aesthetics market there are many people making wild and unsubstantiated pseudo science claims.  Including totally inaccurate claims about what the treatment can achieve and how it works.  This is both misleading patients/clients and breeding distrust in the market.

This article is based upon the best current scientific understanding and some of the clinical papers referenced are listed below.

The video What Makes Tattoos Permanent explains that aspect very well but does not go into detail about how tattoos are removed.  It could be interpreted that the laser beam is hitting the particles and this impact is causing them to shatter.  That is not what is happening after all a laser is a beam of light not a hammer.

In order to shatter the tattoo particles we need to heat the illuminated side very rapidly while the dark side is kept cool in what is in effect a 37C water bath – the skin.

If we can heat the illuminated side of the particles fast enough and get them hot enough while keeping the dark side cool and not heating the skin. The heated side will expand and the particles becomes stressed.  This is similar to pouring boiling water into a glass jar.  Under the right conditions the jar will break.  However if we simply place the jar in a pan of cold water and heat it on the stove until the water is boiling it will not break, as it has been heated evenly and therefore expanded evenly.

Since we want the particles to shatter we need to heat the illuminated side very, very quickly.  Hence the need for a high power laser that is very specifically targeted.  This use of light energy to heat the particles is the photothermal effect.

Sounds simple enough but like many things the devil is in the detail and the details depend upon a number of factors:

Particle size, particle colour and particle depth but we also do not want to damage the skin and skin colour is also a consideration.  Finally there is the light itself.

Tattoos are formed of particles than can also be stuck together in clumps.  If the particle or clump of particles is larger than around 0.02mm ( 2 hundredths of a millimeter) they will be too large to be removed by the macrophages. Actually breaking the particles down to this size is not too difficult which is one reason why initial treatments produce good results.

However even when broken down to digestible sizes many particles will not be removed for one of the following reasons :

With each treatment some of the particles are broken down further and fibroblast cells containing pigment can become moribund and potentially removed by a macrophage, which will have the effect of fading the tattoo.  Alternatively they can be reabsorbed by a new fibroblast, in which case the pigment will remain in situ but instead of a single particle it will be several more dispersed particles and will also tend to fade the appearance of the tattoo.

The problem is that as the particles become smaller the power of the laser needed to shatter them increases.  If we try to reduce the size further with a relatively low power laser what we end up doing is basically cooking the skin which is painful and can result in scarring and pigment changes.

Ideally we want to deliver a very fast pulse of energy so that the tiny, highly energy absorbent tattoo particles, are heated very quickly but the surrounding skin is not.  Slower lasers simply cannot deliver the energy fast enough and if the operator tries to push the machine beyond what it is capable of the patient suffers pain, potential scarring and pigment changes.

Black objects tend to absorb all colours of light, while other colours are more selective.  Therefore the operator needs to select the colour of light that will be best absorbed by the target.  It would be impractical to make a machine with many different wavelengths and fortunately if the wavelength available is not perfectly tuned to the target there is often still some absorption of the energy.   The better the match, the higher the absorption.  But as the absorption is reduced, higher initial laser power is needed.  And again simply pouring more energy into the skin at a rate that is too slow to cause thermal fracturing of the particle will simply cook the skin.  Sufficient power is crucial.  The more power the incident laser beam has the further from the ideal colour that the machine will be able to effectively treat using the photothermal effect.

Fortunately tattoos are often not a pure single colour e.g. A mixture of blue and yellow particles will appear to be green but the tattoo will not respond as a green tattoo, which gives us another way to remove the tattoo.

Providing there is a proportion of the tattoo pigment that responds to the light wavelength chosen, the photothermal effect will shatter some of the particles and this shattering will produce an audible cracking sound that accompanies a shock wave which travels through the skin.  The more powerful the incident laser light, the greater the shock wave and with a picosecond laser this shock wave can effectively shatter any colour particle within a significant radius.  i.e. Typically this shock wave will lose half its energy in 0.3mm , which at a cellular level is a large distance.  Again the strength of this photoacoustic effect is directly related to the power of the laser.

As you can see from the above two conditions need to be met in order to be effective:

The much higher power of the picosecond lasers with ensure these criteria are met over a much wider range of conditions than the slower less powerful alternatives.

As we have seen above the power of the laser beam is crucial to effective treatment and this is exacerbated the deeper the particle is within the skin.

The available power reduces exponentially with depth and at a depth of 2mm there it typically only around 20% of the initial energy available to heat the particle.  Therefore high power is crucial if we want to see effective clearance across a wide range of colours at all relevant depths.

Depth also has a relationship with the amount of debris still retained in the skin at more shallow depths.  Any remaining debris above the target will create a shadow and affect how well the deeper particles are treated.

We want to preserve the skin and ideally leave it unblemished once the tattoo has been completely removed.  The key to this is to reduce the heat deposited in the skin.  We can help this by cooling the skin but by far the biggest effect we can have is by again increasing the power.

The targets we are seeking to treat are tiny and for complete clearance they are in the region of 1 millionth of 1millimeter.  They therefore heat up very quickly and lose heat very quickly.  Also as the particles become smaller the temperature we need to get the illuminated side of the tattoo particles to is very high i.e. Over 1000C.

But it is essential we keep this heat very localised to the tattoo particles, consequently we need enough power to run a small town but only for a very very short period of time.  300 picoseconds is approaching the ideal pulse width and as a result the longer term damage to the skin is in our experience negligible, when treated appropriately.

Fluence is really a measure of how much damage we can be doing to the body by delivering heat.  It tells us very little about how effective a treatment will be.  Fluence is measured typically in Joules / square centimetre (J/cm2).

As can be seen from the table.  For any given fluence the power density of a 300ps laser will be 1660% higher than a 5ns laser, irrespective of manufacturer, or wavelength.

Since the relative power density of the 300ps laser is so much higher, the energy used will always be much less.

This means that the risk of damage to the skin is also reduced.